MENUMENU
MENUMENU
Disclosure: We receive compensation if you choose to speak to one of the recommended timeshare exit companies here. The following information is for educational purposes and is not to be considered professional or legal advice.

Timeshare Legal is one more timeshare exit company that may be able to help you cancel your timeshare. The company has been in business since 2009 and is located in Egg Harbor Twp, NJ.

Although this company has been around for several years, we’ve only just recently begun seeing the company’s advertisements on T.V. and Google.

Scrolling down and we see a “Trusted Partners” headline above large news network logos like CNN, Fox News and more. It’s unlikely that these large news networks would “partner” with a timeshare exit company, so this is likely referring to advertisements the company runs on these news networks. A bit of a stretch to call them partners.

We also see that the company offers an escrow payment option. This is also something we like to see because it means the timeshare owner doesn’t need to pay for the cancellation service in full until after the timeshare is cancelled. Learn more about escrow and why it’s important here.

Collection relief services are also offered, which can be helpful to owners who are behind on their payments. This is another good sign because many timeshare exit companies aren’t able to work with owners if they are several months behind on their maintenance fees or already in default.

Moving to the Our Team page and we see pictures of the company’s employees. Here we can see that Timeshare Legal has more than 30 employees.

The testimonials page has several positive written and video testimonials from customers. We like to see video testimonials because these are hard to fake. After listening to a few of these video testimonials, it appears that Timeshare Legal operates by sending an employee out to the customer’s location for a face-to-face meeting. While we can understand how this can build trust, it likely increases the cost of the service.

This company has an A+ on the BBB with four positive reviews and two complaints. The two complaints must have been resolved fully because the details are no longer available. One review on the BBB shows that Timeshare Legal was allegedly able to get the customer money back after their cancellation. This is rare to see in the timeshare exit industry and is a very good sign.

The company also has several positive reviews on Google and Facebook. However, we did come across two negative reviews on Facebook that are a bit concerning, but we can’t verify their validity. 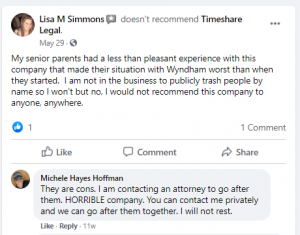 It is common for a business to have a few negative reviews, but when the reviews go unanswered, that’s when customer service becomes a concern. Timeshare Legal has had 11 weeks to respond to these comments, but hasn’t. Perhaps the company just hasn’t seen them yet.

Overall, Timeshare Legal appears to be a legitimate operation. The company has minimal reviews online and is in good standing with the BBB. Although the company does mention an escrow payment option, there are also a few mentions of a Money-Back guarantee. A Money-Back guarantee wouldn’t be needed if you pay with escrow.

Learn more about escrow and why it’s important here.

Looking for more information about cancelling your timeshare? Submit a contact form on the right of the page, give us a call or initiate live chat.

GET Your Timeshare Exit Cost Now!