MENUMENU
Disclosure: We receive compensation if you choose to speak to one of the recommended timeshare exit companies here. The following information is for educational purposes and is not to be considered professional or legal advice.

Table of Contents:
Add a header to begin generating the table of contents

Wesley Financial Group is one of the largest and most established timeshare exit companies in the industry. The company has been in business since 2011 and has offices in both Franklin, TN and Las Vegas, Nevada.

Wesley has more than 450 employees and has assisted more than 15,000 thousand timeshare owners with their timeshare issues. The company has managed to scale up its operation significantly while maintaining a high level of customer service along the way.

Unlike other timeshare exit companies, Wesley Financial Group does not use lawyers to resolve your timeshare issues. Instead, Wesley helps its customers write letters and make phone calls to their timeshare company. This is referred to as the “Advocate Model” by Wesley.

We here at TimeshareExitCompanies.com, agree that this method of timeshare exit can be effective, but disagree that a lawyer is not ever needed. In some situations, a lawyer may be essential to a timeshare exit.

A lawyer may also be able to sue the timeshare developer in an attempt to get you your money back. This is especially helpful in situations where you believe you were lied to or deceived. Getting money back is rare whether you choose to use a lawyer or not though.

Either way, Wesley offers a 100% Money-Back guarantee so you really don’t have anything to worry about if the company’s method to timeshare exit doesn’t work for you. Wesley has been doing this for a long time and won’t even take you on as a client if it doesn’t think it can help resolve your timeshare issue.

Wesley Financial Group vs Do It Yourself

Wesly does not use lawyers to attempt to get you out of your timeshare, so you must ask yourself what the benefits are to using its services over simply doing it yourself. Some timeshare resort developers have initiated timeshare exit programs of their own that may be able to assist you with getting out of your timeshare.

As of February, 2021, the following timeshare resort developers offer a “deed back” or “take back” program according to the American Resort Development Association (ARDA).

If you owe a mortgage on your timeshare or are behind on maintenance fees, many timeshare resort developers won’t be interested in letting you give the timeshare back to them.

If you’re current on maintenance fees and are paid in full on the mortgage, the timeshare company may still not take the timeshare back even though ARDA has claimed it would. This is where things can get tricky if you’re attempting to get rid of your timeshare on your own without the help of an exit company like Wesley Financial.

If you choose to try and get rid of your timeshare yourself, there is a higher chance that your credit will be negatively affected at the end of the process. Your timeshare company may also attempt to sue you for losses and garnish your wages, but this is rare.

Wesley Financial Group is here to help when your timeshare company chooses to ignore your requests to get out of your timeshare. The company has resolved thousands of timeshare issues for its clients and has methods to protect your credit throughout the process.

Unlike other unscrupulous timeshare exit companies, Wesley Financial Group is selective with the timeshare owners it works with. The company will only work with timeshare owners that feel they were lied to or misrepresented during the sales process.

The company is also selective with the timeshare developers it works with. Wesley is able to work with more than 300 different timeshare resort developers around the world, but it can’t work with some travel clubs.

Wesley gets a +1 from us for being selective with the timeshare owners and developers it works with.

A greedy timeshare exit company would take everyone on as a client and hope for the best. Wesley isn’t about that. The company is only interested in working with owners it knows it can help. This is likely why the company has been in business for as long as it has and has garnered so few negative reviews online.

Note – A travel club is different from a vacation club. Some timeshare developers stopped calling their product a timeshare and changed the name to “Vacation Club” or “Vacation Ownership” because the word “timeshare” had become too affiliated with a scam. For example, “Marriott Vacation Club” or “Disney Vacation Club.” A travel club would be something where you pay for a membership in exchange for access to different “travel discounts.” Two examples of travel clubs would be Travel Advantage Network and Pacific Palm Destinations.

According to a press release in early 2020, Wesley announced that it had “successfully cancelled 3,390 timeshares in 2019, resulting in nearly $50 million in mortgage debt relief for its clients.”
According to the same press release, the company cancelled 1,114 timeshares in 2018 with nearly $15 million debt relief. The press release further goes on to state that it typically takes Wesley an average of less than 300 days to resolve your timeshare issues.
A new press release was published in January 2021 that stated Wesley experienced year-over-year increases of 195% in timeshares canceled and 234% in the amount of debt relief. This press release also mentions that Wesley was named Fortune Best Workplaces for Women™ for 2020 and debuted at No. 203 in the Inc. 5000 Fastest Growing Private Companies.
Cancelling thousands of timeshares is no easy feat. Wesley’s growth from year to year is a strong indicator of its successful timeshare resolution process.

Wesley has a high rating with Dun & Bradstreet which shows it is financially strong and has a high net worth, among other things. A high net worth is important because it shows that Wesley Financial Group is able to keep its promise of a 100% money-back guarantee if the resolution of your timeshare issue is not achieved.

It is unlikely that a Wesley Financial Group customer will need make use of this 100% Money-Back Guarantee though because Wesley does not take on customers it doesn’t think it can help.

Let’s analyze a few reviews to determine their validity: 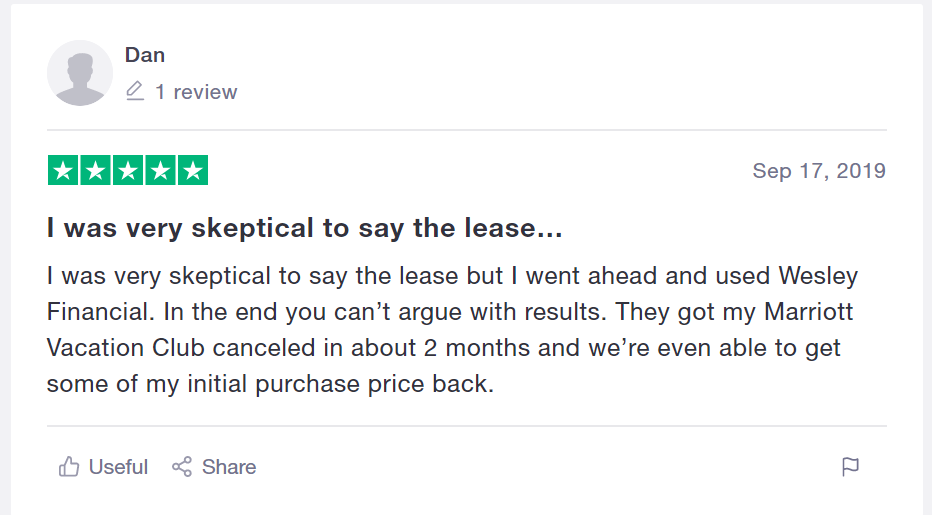 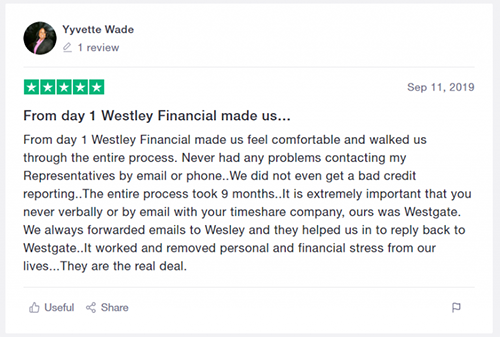 Here is another great review from customer Yyvette Wade. What we like about this review is the owner stating that they did not receive a bad mark on their credit report. Some timeshare exit companies will assist with your timeshare cancellation, but your credit will receive a negative mark. That does not appear to be the case with this customer.

This positive review was found on Best Company and mentions a Wyndham timeshare cancellation with a debt of a $170,000.  That is an awful lot of money to save a timeshare owner!

Wesley Financial Group reviews also include video testimonials from customers. Video testimonials are the highest level of review a company can receive. Think about it. If a husband and wife is willing to go on camera and endorse a company, they are likely satisfied customers. They aren’t hiding behind a keyboard and they’re willing to put their name out there to express their gratitude for the company’s services. This is another good indication that Wesley Financial Group is a trustworthy company. Have a look at some of these video testimonials here:

Reviews online can help give you an idea of the Wesley Financial Group cost. Some reviews state that the cost was $4,000 while others have stated their cost to be $23,000. In general, if you owe a mortgage on your timeshare, the cost will be higher than if it’s paid in full. This is true for most, if not all, timeshare exit services.

This company has run commercials to advertise its services. The commercial features company owner, Chuck McDowell, and two of the company’s satisfied customers. Again, video testimonials from actual customers are always a very positive sign. If the commercial featured paid actors, the company would not be as trustworthy. New commercials from the company mention a website by the name of icanceltimeshare.com. This is a different domain name, but the brand behind it is Wesley Financial Group. icanceltimeshare.com reviews should be one in the same with Wesley Financial Group.

Still have questions about cancelling your timeshare? Submit a contact form on the right side of the page, initiate live chat or give us a call at 949-229-7748.