MENUMENU
MENUMENU
Disclosure: We receive compensation if you choose to speak to one of the recommended timeshare exit companies here. The following information is for educational purposes and is not to be considered professional or legal advice.

Table of Contents:
Add a header to begin generating the table of contents

Timeshare Freedom Group is a timeshare exit company with over fifteen locations across the United States. It appears they have been in business since 2010 and have helped over 15,000 timeshare owners according to their Facebook page and their website. According to the BBB, they are headquartered in Laguna Hills, California.

First impressions of their website are that it is not very clear on where to find the exact information about the company owner or the team. The most legitimate timeshare exit companies in the business are proud to display their owner’s name on their website. If the timeshare exit company’s owner is not shown on the website, it likely means there is something to hide.

According to a Sep. 23, 2020 lawsuit filed by Diamond against Timeshare Freedom Group, the owner of the company is Jordan Salkin. A quick Google search for this name brings up two disturbing news articles:

According to the news articles, Jordan Salkin was convicted of attempted murder of his girlfriend and is currently awaiting retrial in Orange County, California. We here at TimeshareExitCompanies.com can neither confirm nor deny these allegations as they are still making their way through the court system, so do with this information what you will.

We were finally able to find information regarding their process under their FAQ section.

Overall, their process seems standard in that they first, offer a free consultation where more information will be gathered. Second, your file will be prepared by a “timeshare cancellation manager”. Step # 3 is simply described as “Timeshare Exit Processing” where a timeshare advisor will explore all legal options. Step 4 is the final stage in which you become “Timeshare Free.”

Below the section that describes their process, a visitor will find the section addressing Frequently Asked Questions where they explain more details around the process along with time length and cost.

While most timeshare exit companies do not provide any reference to a length of time, Timeshare Freedom Group states it could take any where between 9 to 12 months if not longer depending on the timeshare. If they are not able to successfully help you exit your timeshare after 24 months, they will provide a full refund.

“In fact, if after 24 months we have not successfully canceled your timeshare contract, we will provide a full refund as is stated in our initial scope of services agreement.”

Regarding cost, in their FAQ they explain that it “depends” which is an industry standard response as it would depend on which timeshare, the complexities and other unique factors regarding an individual’s case. They offer two ways to get a quote.

The first option is that they recommend you speak with an advisor for a free, no pressure consultation. The second option where they can provide an estimate would be to complete a form that takes roughly 4-5 minutes to complete. The answers will then be provided to a client advisor who will reach out to discuss an estimate.

Although the cost is not displayed on the company’s website, we did come across a few reviews that mentioned the cost of the service. According to these reviews, the cost is typically around $4,000 – $7,000.

No matter which timeshare exit company you choose to work with, it’s always a good idea to negotiate a lower price and get it in writing. Pretty much everything in timeshare works on commission, so negotiation on price is almost always an option.

At the time of our first review of Timeshare Freedom Group, the company did not have BBB page however as of 2/20/21, it appears they now have one. There are no complaints listed and the BBB provided a rating of “F” and only shows that they have been in business for 3 years which doesn’t align with their claim to have been in business for 10 years as stated on their Facebook page and their own website. The reason why the BBB has provided an “F” rating is because they have failed to respond to 4 customer complaints.

We were only able to see one complaint, shown below: 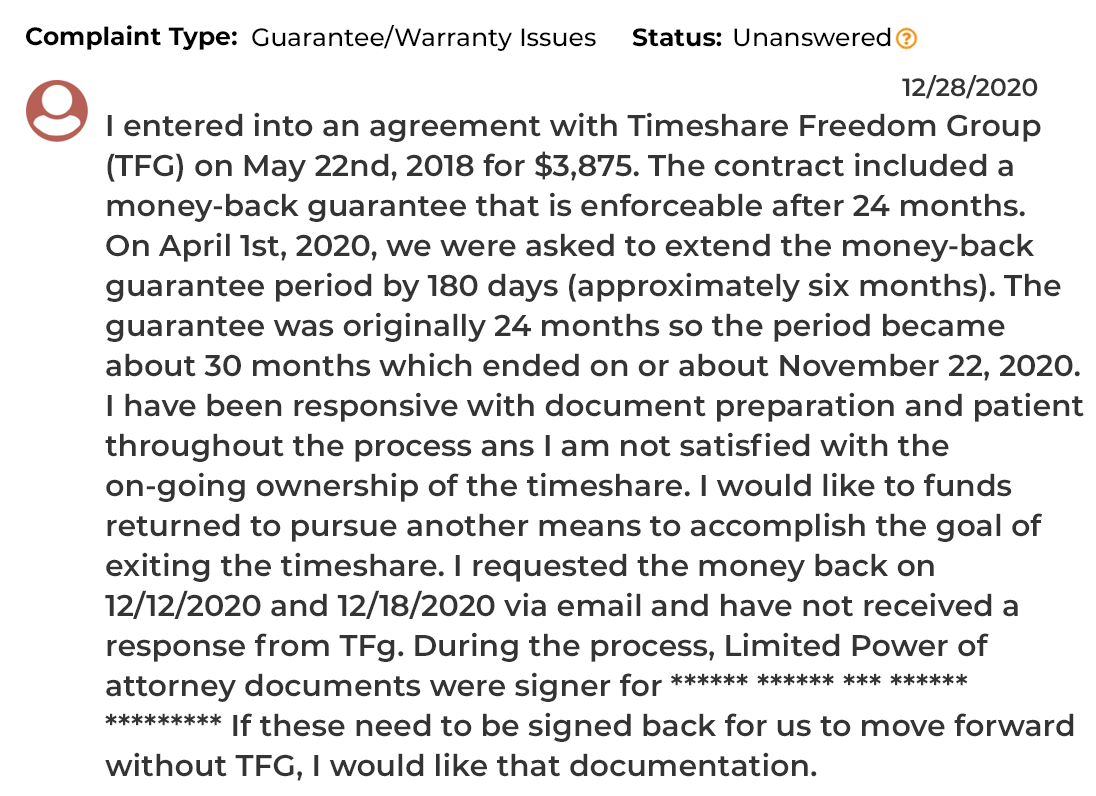 We were not able to locate any other information about Timeshare Freedom Group on the California Secretary of State’s website.

Timeshare Freedom LLC, which may or may not be the same company, also operates under many websites and names, such as:

All of these businesses share the same address in Orlando, Florida and the Florida Secretary of State shows that Timeshare Freedom LLC was established in 2010.

So while we can’t find a concrete tie between the two entities other than we can’t locate any proof that “Timeshare Freedom Group” has indeed, been in business for 10 years.

On their website, Timeshare Freedom Group has an “Endorsements” page that mentions the names of several famous radio personalities who endorse the company’s timeshare cancellation services.

We cannot verify whether these are paid endorsements, though it is likely that they are. This is not bad, but simply a method of advertising.

For this reason, they also link to reviews on Trustpilot and Yelp on their “Reviews” page.

This speaks highly of the business and its confidence in its own reputation. Another way to look at this is that if they publish customer testimonials on their site, they could be edited or scripted whereas linking directly to the source shows transparency. Of course, they do post testimonials on their page and provide links to their Yelp, TrustPilot and Facebook page where you can review their latest reviews.

We do recommend clicking on the links directly to the sources (Yelp, TrustPilot and Facebook) since they don’t update the “star ratings” to reflect current rank.

As of 2/20/2021, Yelp shows them 4.5 (out of 5) stars based on only 19 reviews. Their most recent review was posted by “Mandy S” of New York. To be transparent, Diamond Resorts has many lawsuits against timeshare exit companies, where Timeshare Freedom Group is one of many.

Based on this review, it seems like Timeshare Freedom Group may outsource to outside attorneys versus in-house. Regardless, the client is satisfied. 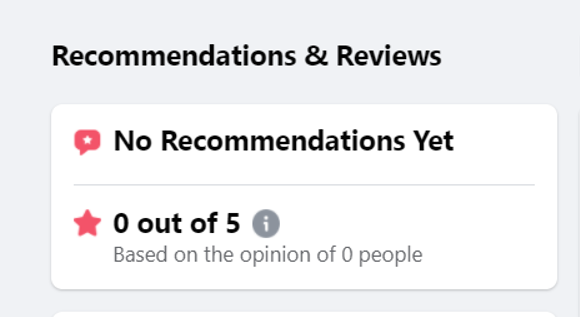 We are not able to locate a Google page or Google reviews for this company.

Although the company has mostly positive reviews, our recommendation does not change. We recommend working with companies that offer a low up-front fee escrow payment option, so the timeshare exit company is only paid in full after the timeshare issue has been resolved.

The Diamond lawsuit is the most recent so we’ll focus on that one. Diamond alleges that Timeshare Freedom Group’s unlawful conduct includes, but is not limited to:

– Falsely conveying to the public that they can get customers out of their timeshares without even investigating whether there is any legitimate reason to do so;

– Falsely conveying that they can do this “legally;”

– Persuading customers to stop paying Plaintiffs as part of their process or otherwise;

– Offering and engaging in credit repair services in violation of applicable laws; and falsely characterizing cancellation as a success even if it results in default and resultant foreclosure.

This lawsuit is still ongoing so nothing can be confirmed as of yet. However, these allegations appear to be very similar to the allegations Diamond makes against most of the exit companies.

One would expect that a company that has been in business for 10+ years would have more reviews and a better web presence than what we were able to find. It is odd that we were unable to find a specific BBB page for this company with more information.

The unrelated criminal charges of the company’s owner is also a cause for concern and something to think about. However, these cases are still ongoing and the defendant should be considered innocent until proven guilty.

It is not known, however, whether Timeshare Freedom Group charges up-front for their services or uses some other payment option, as this is not mentioned on their website. Because they offer a 100% money back guarantee, this leads us to believe there are some costs expected up-front.

And while the 100% money back guarantee seems like a no-brainer and that the company would do everything, they could to ensure their client is successful in ending their timeshare obligation, this is not always the case. Or when and if it is the case, it could take an additional year or so to receive your refunded money as we have read in previous reviews.

We like to recommended timeshare owners work with a timeshare exit company that uses a low up-front fee escrow payment option that allows a majority of the cost of the service to first be paid to a third-party escrow holding account.

With a low up-front fee escrow payment option, the payment is only released to the timeshare exit business upon the successful resolution of the timeshare issue, preventing the company from disappearing with a customer’s money.

Using such a payment option is the best way to ensure protection from scams.

If you would like to find out more about timeshare exit companies or low up-front fee escrow payment options, please use our contact form or live chat to reach out to us. Or, call the number at the top of the website.

GET Your Timeshare Exit Cost Now!